I’ve been able to do some work in the studio these last couple of days, and have some actual progress to report! Tracking is finished on the Black Light/Black Death project. 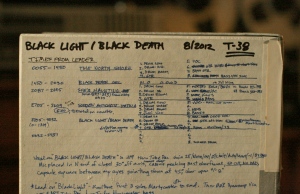 I’m seriously hoping to get caught up enough that I can start posting “normal” blog entries… you know, regular little updates on what’s happening with the project.

One never really knows with these things.  There may be some insurmountable problem in one of the core tracks which would be easily solved by a punch-in, or even re-recording a track here or there.  Of course, that’s not necessarily in keeping with the nature of the project, so I’ll keep it to a minimum–only for the real dealbreakers.

When last I wrote about this project (post before last, actually) I’d gotten as far as describing the original songwriting and tracking process.  After a week spent in the lukewarm potholes of heck, I had the core tracks recorded.  Three songs were complete, and a fourth had reached some sort of weird plateau.  A fifth song, “Black Light,”was struggling for life.  It was stuck in some weird sort of artistic ether: too cringeworthy to merit development, but far too cool to ignore.

I threw a quick mix up on the desk and was surprised at the results– this was fairly not-bad, considering how horrible I thought it was going to be.  And then things began to go horribly wrong.

The unfinished nature of “Black Light” hung over my head like a stormcloud.  I’d been trying to stretch myself when I started it.  My guitar skills are sort of “rough hewn” (to say the least), so I left large, open spaces to be filled with guitar leads.  I also left plenty of room for lyrics, since the chord progression and main hook showed up before the words (or even the concept).  I had a basic idea of where the song was going, but beyond that nothing much.  So rather than creating a scratch track and playing along with that, I tracked drums to go with what was playing in my head… only I lost count somewhere in the middle.  So now I had a song which had no lyrics, needed seasoning with guitar chops I had yet to develop, and which was structurally flawed.

That, and a hook that just would not quit.

It was demoralizing.  And worse still, I couldn’t just move on to something else.  I recorded this project using unusual techniques (unusual for me, anyway), so I couldn’t just sideline the project.  I had all my compressors set up to run in parallel; the drums were all connected onto one buss, and so on.  If I was going to work on another project, I would have to undo all that work– writing everything down first– and park this project in the weeds.  That would be the end of BL/BD.

I mixed “The North Shore,” which is that song I resurrected from seminary days.  I threw down a mix or two of “She’s Haunting” for future modification.  A third piece– I was referring to it by it’s working name, “Sodden Antichrist Tortilla–” made a couple piteous attempts to rise from its plateau.  “Black Death Girl” was on a separate reel of tape.  I was afraid to touch it, because I feared it had an insurmountable flaw in one of its core tracks.  And “Black Light” kept nagging at me.

And then everything went wrong again.  I’ve been at odds with a particular medical condition these last couple of years, and in January suffered a major setback.  I was couch-bound for the most part, and in enough pain that at times I lost track of my surroundings.  When I could, I would get up and try to do things.  One of those things was writing–if nothing else, it would help me keep track of what was happening in my life.

And eventually, lo and behold, I found myself thinking about “Black Light.”

And writing lyrics for “Black Light.”

Only instead of fixing my rotten lyrics, I started thinking about what made me want to write the song in the first place.  And the rotten lyrics faded away in the face of something much better.  New lyrics fell out of my pen onto the paper–new lyrics in a new format that again required me to stretch musically.  Only this time it wasn’t forced.  I just let the lyrics and melody fall recline on the song structure, allowing the structure to stretch the song’s concept to fit the established parameters.

Working a few minutes at a time (as my back allowed), I was able to piece together the actual structure of the song–the drum part I’d actually recorded, not the one I meant to record.  It took a several days (and a few courses of muscle relaxants), but I got it.  And the lyrics fit pretty well.  And my vocal style stretched nicely to accommodate the new technique.  Meanwhile, my ability to address my health problems improved.  The symptoms decreased, and by the time Tala Vera asked us in March to play a show at the end of April, I was well enough to consider giving it a go.

There’s a lot of Andy Smash material that’s not really Hotrods material.  I didn’t expect that any of the songs from this project would work with the Hotrods, but just for laughs I busted it out at practice.  Much to my surprise, everyone loved it.  Including me.  By the time we went on stage, “Black Light–” the ugly duckling of the project– was the centerpiece of our set.

So anyway, here it is the end of May, I’m back on my feet, and tracking is by and large finished.  What’s more, two songs are already mixed, and I don’t anticipate too much trouble mixing the other three.  Then mastering, then artwork, then duplication, and ultimately (hopefully) some sort of hard-copy release.  Things are looking good.

North Coast punk-rocker/theologian. A good head for gears and an eye on the far horizon. DIY recording artist and frontman for the Rust Belt Hotrods.
View all posts by andysmash →
This entry was posted in Uncategorized. Bookmark the permalink.